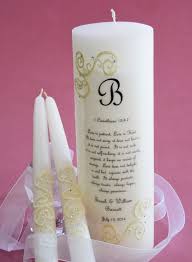 There is a lot of interest in adding extra components to Marriage ceremonies,
particularly a Ritual or Unity Ceremony.

The Most Popular are:

tapers (usually lit by someone from each family). This represents the unifying of both families with the marriage. (The candle is then lit again at each anniversary).

The Wine Ceremony – where wine is poured from two containers into one, and drunk by the couple to represent the blending of two individuals into a couple.

The Sand Ceremony – this is particularly popular where children are already in the family unit. The couple and each of the children pour a layer of coloured sand into a glass container representing the unification of all the individuals into the family unit.

The Rose Ceremony – This is a way for the couple to show their appreciation for both mothers (or both sets of parents) by presenting a rose (or other flower). This ceremony has a number of variations which are equally effective

The Warming of the Rings – This simple ceremony usually takes place prior to the Solemnisation and Ring Exchange. The rings are placed on a cushion and passed to members of the families (or etended family – or the whole gathering). As the rings are passed each person places their hand on the rings, warming them and saying a private belessing for the couple.

The Wine Box – The couple acquires a bottle of very good wine that will last. They place the wine, with a pair of glasses in a strong wooden box, along with a letter each has written to their partner. The letters should detail the reasons that led to the marriage, the qualities of the partner and the expectations for the marriage. Each letter is not seen by the other partner. The box is sealed at the Ceremony (usually with the couple nailing it shut) and a pre-determined anniversary is named as the opening date, where the wine is consumed and the letters are read by the other partner.

The Dove Release Ceremony – The white dove has been used throughout history as a symbol of love, peace, purity, faithfulness and prosperity – and they choose one partner for life. The releasing of a pair of white doves symbolises the Bride and Groom taking wing into the world as a couple.

The Handfasting Ceremony – This very old Pagan ceremony sees the couple join their hands and encircle them with a cord or ribbon (it could be a family heirloom) to show their unification. The cord or ribbon is removed from the hands still tied and kept by the couple in this state to continually represent their unending love.

The Stone Ceremony – A flat white stone is presented to each guest. During the Ceremony they are asked to silently make a wish for the couple symbolically represented by the stone. Marker pens are distributed so each guest can write their name on the stone, which is then placed in a glass container for the couple to display in their home, to remind them of those who attended their wedding and the wish they made.

… and there are several others

Maggie is able to present one of these extra ceremonies
within your Ceremony as part of your 5 Star Package.

It’s Your Day,
Your Way